The 4 novellas—Unseen Enemies, Mexican Betrayal, Tokyo Search and Japan Capture—and the novel, The Secrets Man, that they comprise are all now published as ebooks on Amazon. Take a look for thrilling adventures, exotic settings and characters responding to stresses most of us would want to avoid at all costs.

As always, let me know what you think back here on the website or through email. Tell your friend, too, please.

The two novellas, American Chase and Mexican Betrayal, which serve as Parts 1 and 2 of The Secrets Man novel, are expected to go live on the Amazon store in the new few days.  I hope you enjoy them and I look for your comments.

The remaining two novellas, Tokyo Search and Satsuma Discovery, are expected to be available within a week on two.

Reactions to getting covered

Here is the first of 4 variations on The Secrets Man cover, which will grace the novellas that make up this thriller. I’d welcome your impressions.  Thanks. 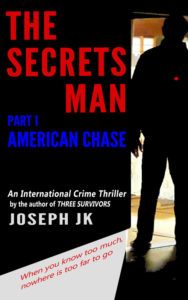 Pleased to announce that the first parts of The Secrets Man are about to be released as novellas. This will give readers who aren’t familiar with my work a chance to sample my take on weaving thrilling scenes with international intrigue and suspense. A mystery is introduced in the first of these four novellas. They’ll all be available soon.

Here’s hoping you get a chance to enjoy and comment on what you find in them.

After international delay, THREE SURVIVORS now on sale on Amazon

Finally, the adventure memoir, THREE SURVIVORS, is up for sale on Amazon.com. You can look inside the book and buy it here.

For the full story of what delayed its availability on the international front along with perhaps hundreds or more others, check this article and notice the comments that follow it: KDP Books Unavailable To International Readers.

First news of a storm

Later in the growing heat of morning I heard words that chilled me. A fragment of an English weather report jumped out of the static and whining whistles. The man’s voice was authoritative, one of those trained speakers who suggest emotions as they talk. This voice smiled, “Good news, Floridians. The storm is moving out to sea.”

Storm? True, at any given moment two thousand storms rage at sea, but what storm had developed and where on the long Florida coastline had it been threatening? Probably south Florida, I thought, but given our location, the broadcast could also be from halfway up the coast. Where was the storm now? And, moving out to sea? Which sea? I bent my head close to the speaker in the manner of Luis the radio operator on Cozumel. I was ready to fix place names in my mind, to commit to memory coordinates and times. But what came next was sports news about a football training camp, and racing, and then the signal was gone.

First sight of dolphins in the Caribbean

And there they were, taut gray bodies advancing and retreating either side of the very edge of the bow, half obscured by the wave being cut. A mass of bodies swam over each other under the surface, riding with us. Over the sound of the water I heard their high-spirited squeals and squeaks.

Good news for all who’ve been waiting. THREE SURVIVORS has passed through the editing stages and with a few tweaks to the file will soon be ready for uploading to Amazon as an ebook.

We’re still looking at an October publication date and I also expect to have some Reader Extras on the website soon.

Thanks for the interest. 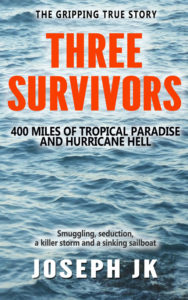 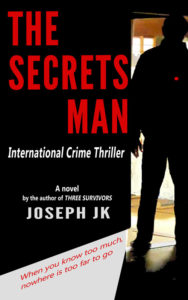